The seabed at Newhey Quarry

A group of young people, Silver circus members, Skylight staff and volunteers ventured out on a walk up to Newhey Quarry. This was just a try out of the route, we will be organising a bigger group once the guides are published and the Covid crisis allows, possibly September or October.

Prior to our trail we asked our young people to find out some information about the Quarry, this found that:

Newhey Quarry is located just off Huddersfield Rd in Rochdale,  it is a great place to explore for anyone interested in Fossils. The fossils that you may find in this area are from around the Permian-Triassic period (around 250 million years ago), with many Calamites (fossil stems of giant tree-like horsetails), bivalves, and brachiopods. It is known to be a great place to find plant fossils! 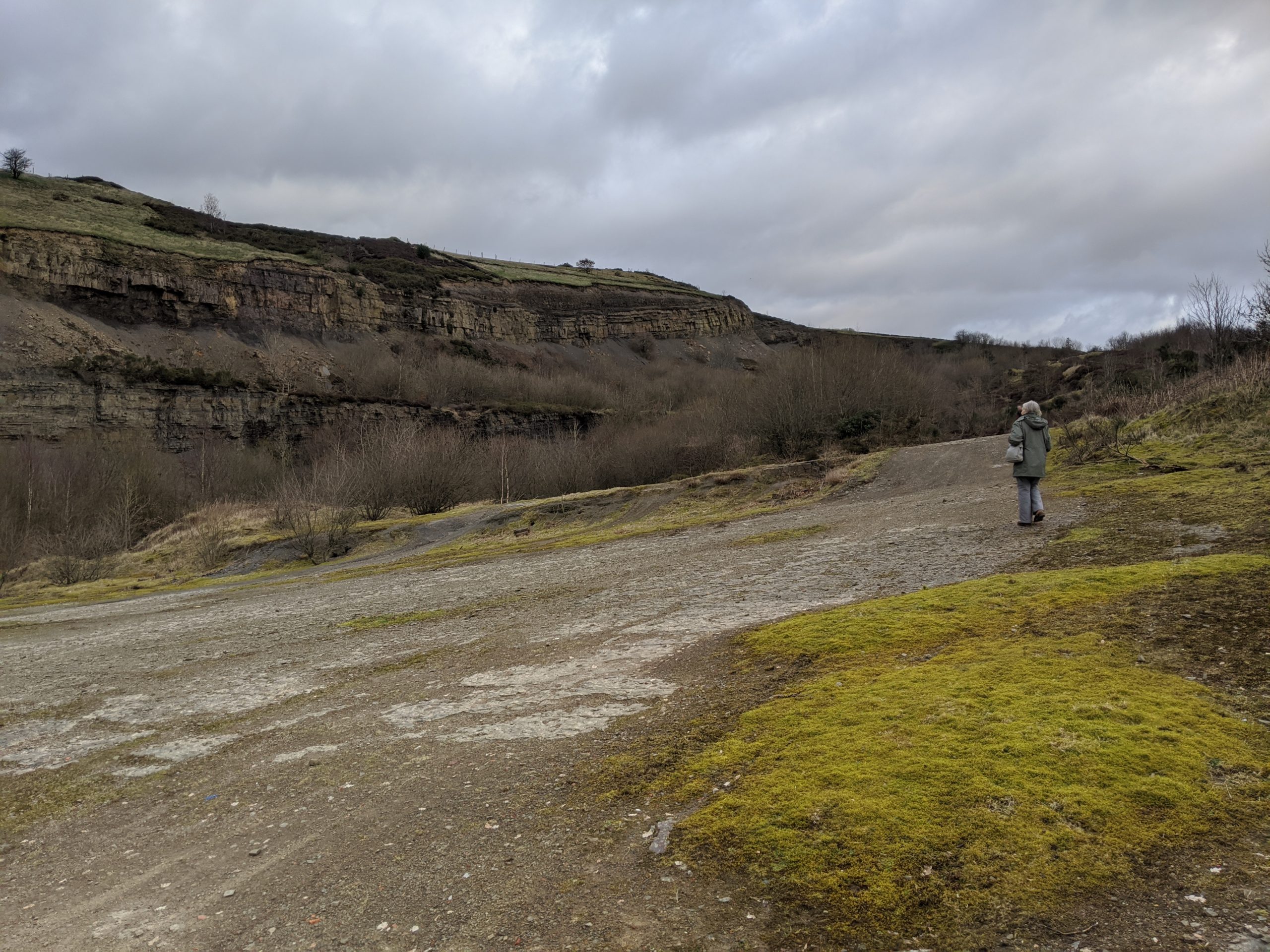 Though it is a great place to explore, it is advised not to go climbing on the scree slopes below the unstable high cliff faces. The quarry is now disused  and used for recreational walks by the local community. More information about visiting the quarry can be found here https://ukfossils.co.uk/tag/newhey-quarry/

A young person in the group said

The floor of the quarry is an ancient seabed. We went to see if we could find any fossils, I loved going on a little scavenger hunt trying to find fossils, it was like we were looking for treasure at the bottom of the sea, when Jim (the group leader) told us he had found one we were so excited! We think that the fossil that Jim found on the path was of a worm tube. We looked around the smooth sloping floor of the quarry, an ancient seabed. We couldn’t find the marks left by fish 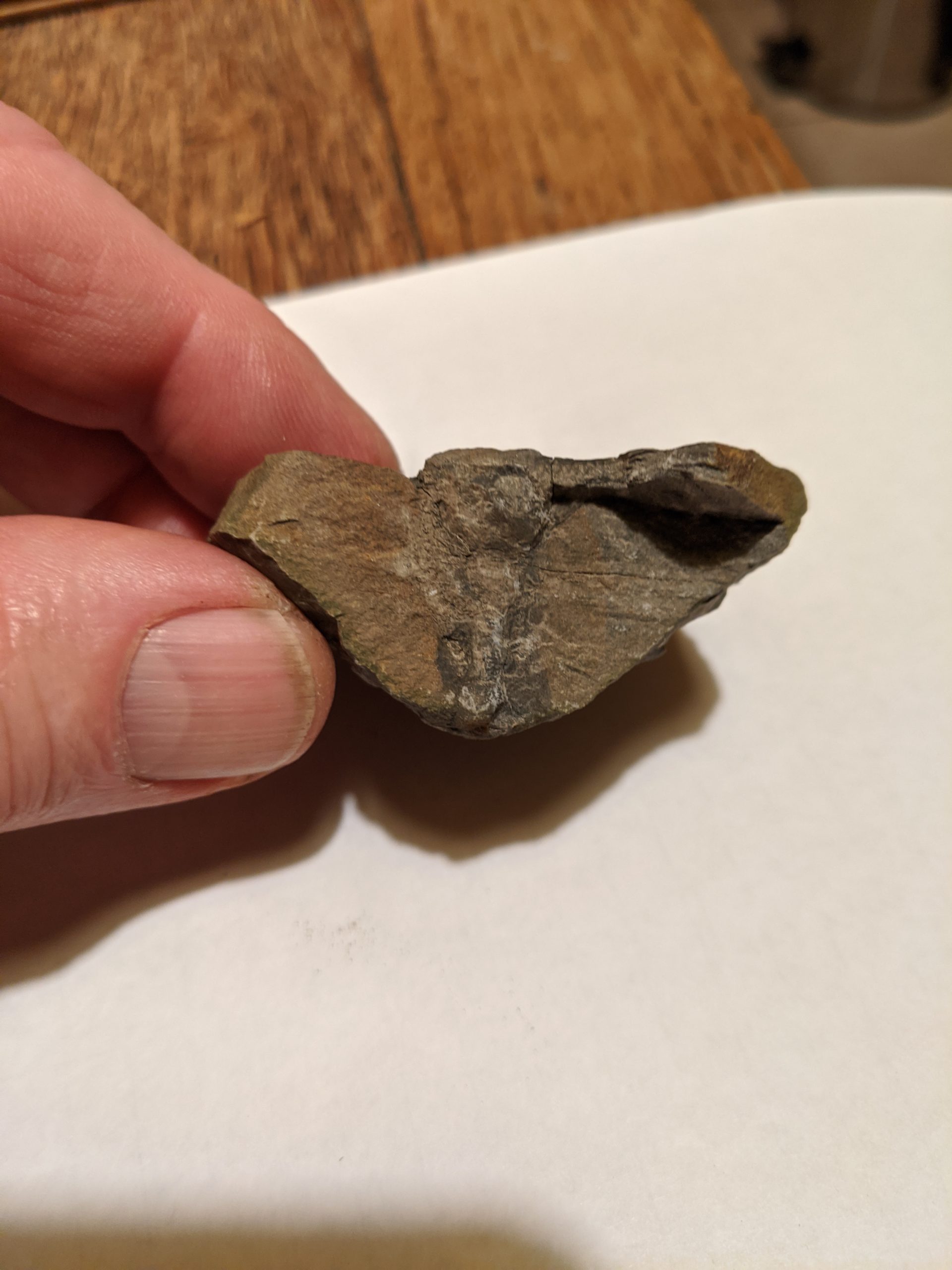 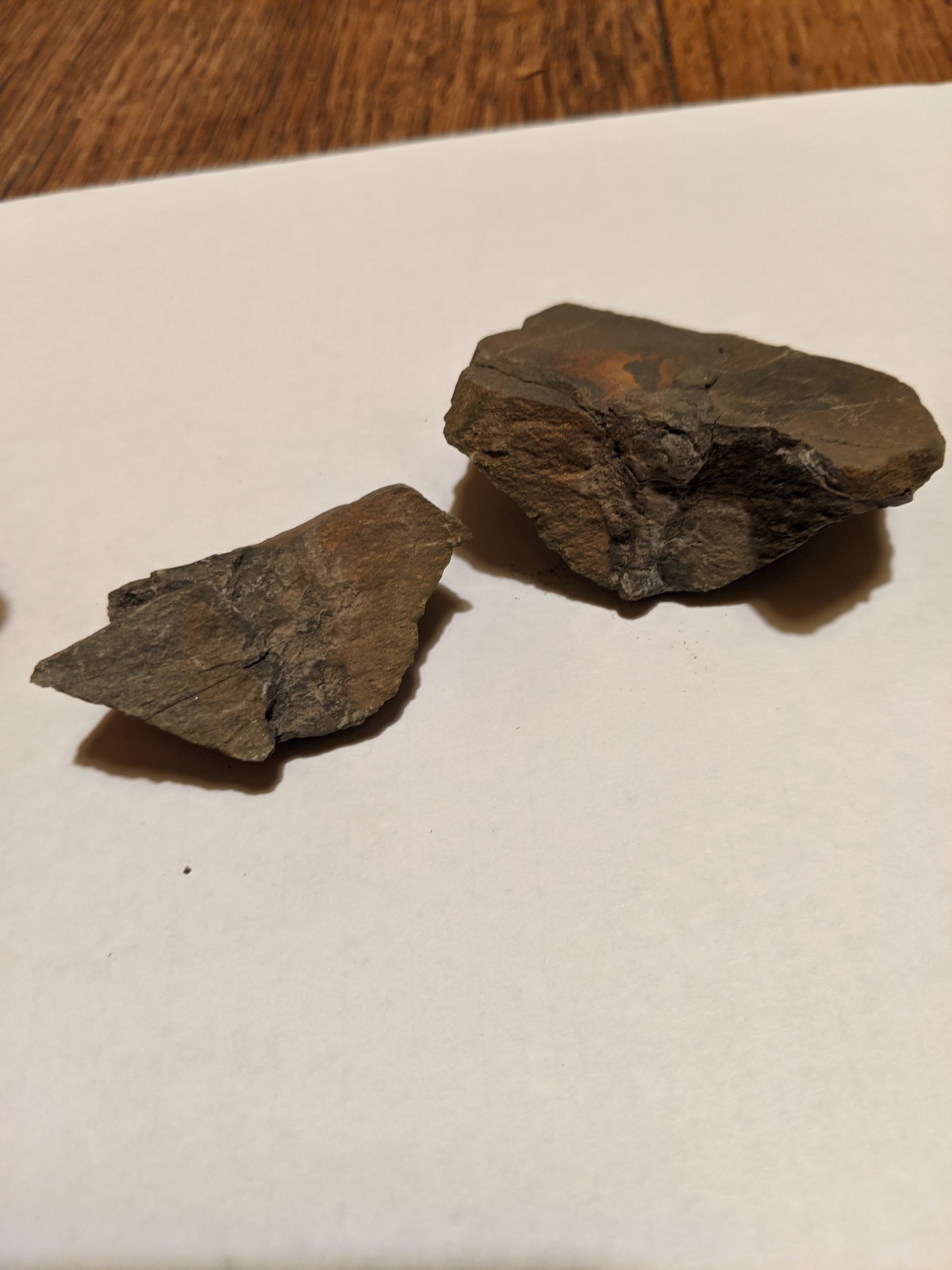 I went on the Sparth Bottom walk on a fairly windy, cloudy day, after a long period of rain and just before Lockdown was declared. It was a walk of varied landscapes. It took in woodlands, wide-open spaces, muddy fields, streams and nature corridor pathways between the Rochdale suburbs and beyond. Although I’ve lived in the area for over 30 years, I saw routes I’d not seen before and the experience has opened up new walking possibilities for the future.

There were many points of interest along the way, but the end of the walk culminated in the vast openness of Newhey Quarry, which I found particularly interesting.

I’d never been to the quarry before, although I had heard it was a good spot for fossil hunting. There is quite a lot of walking and exploring to do in the quarry itself. The area is a vast bowl edged with cliffs and slopes, originally cut for the local sandstone which was used for building. Apparently, underneath, lies layers of mudstones and siltstones over a marine bed where bivalves can be found. The quarry is obviously now disused and has become a place for dog walkers and picnickers. I was particularly drawn to the scree slopes (where I believe the best fossils can be found) and certainly it did not take long before I found something of interest – a rock with the slight traces of a pattern along its surface in a kind of feathery ripple effect – a definite fossil! This made my day and it has been added to my collection of fossils and geological curiosities displayed in the bathroom at home.

Our walking group had to head home, but I felt we could have explored for longer. I left promising myself I will return to search for more fossils.  I have since discovered, worm tubes and nodule type fossils are also quite commonly found on the site. 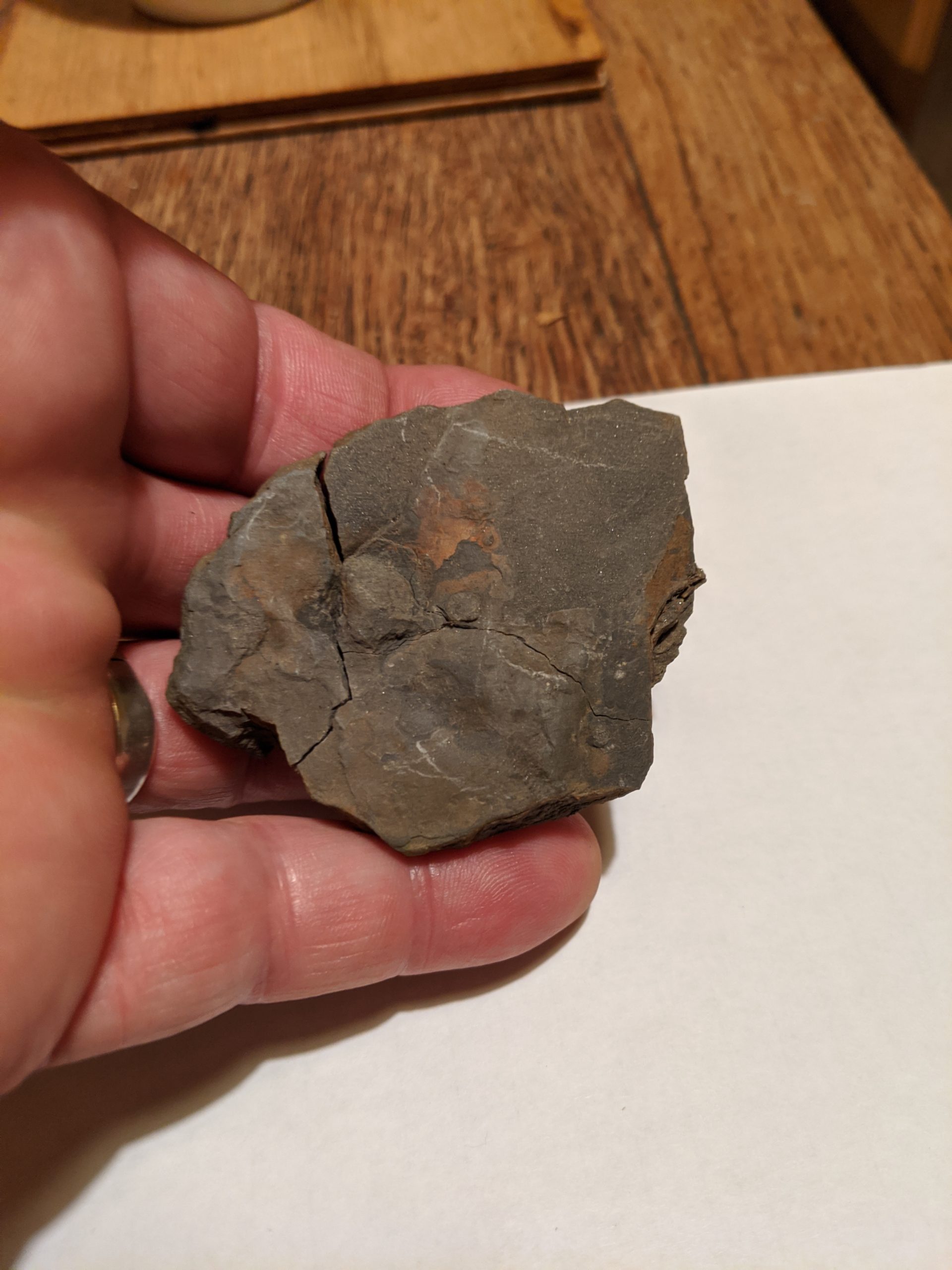 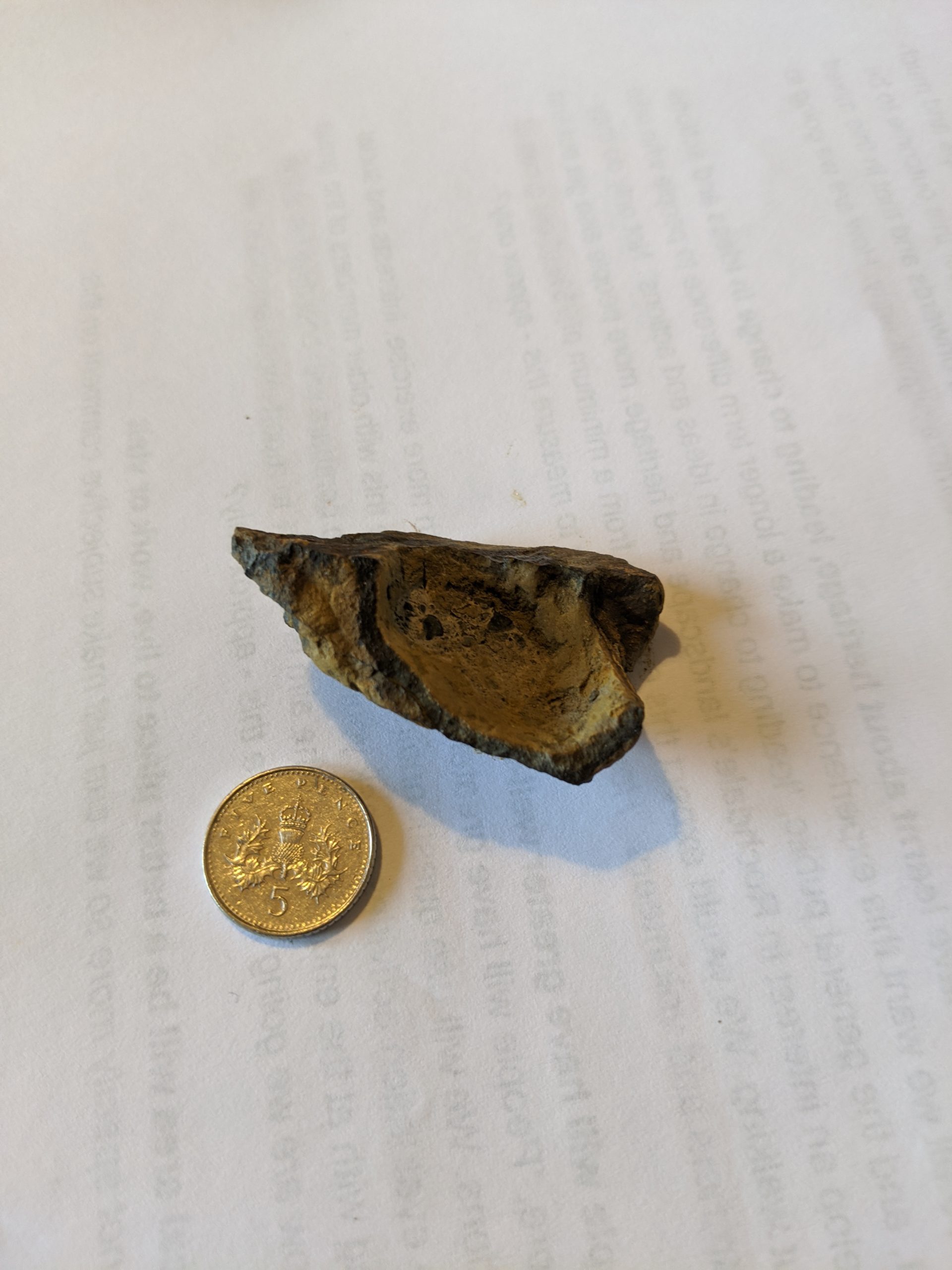