This is the second week of us having our brand new apprentice working alongside our team, Olivia Maxim who has been with us for around 8 years growing up through our youth circus. We are super excited to have Olivia with us and work closely with our youth circus and study on her creative admin course with Burnley College.

Off The Streets – Summer School

With Special Thanks to W O Streets and Link 4 Life for making this project possible Off The Streets Report August 2018 By Charma Force Off the Streets’ gave 34 disadvantaged young people in Rochdale the opportunity to take part in a      creative circus arts project in Skylight during the long summer holiday, culminating in a well-received   performance in our studio theatre. All aims and outcomes were reached. We recruited young people from the local community and our youth circus classes. We had a mix of different ethnicities, ages and abilities, with some diagnosed with ASD and three young people in care.  Sixteen of the young people performed in the show. All the young people were offered a place in our general youth circus classes and 4 of them have now joined. Throughout the project the young people were introduced to a range of new skills such as tightwire, stilt walking, jugging, aerial skills, plate spinning, globe walking, flower sticks, diablo, poi, hoola hooping. We also used games as a way to build relationships in the group to encourage the young people to work   together and learn about one another through play. The young people loved having so much time to   explore all of our equipment, one young person said “these sessions are so good because we have so much time in the day to do things we wouldn’t usually do, to do something fun in the holidays instead of just sitting at home”
The young people displayed a increase in confidence and self esteem in many ways, for example we introduced stilt walking to the group, some were very nervous about the height and felt they wouldn’t be able to do it, however after some time they were able to walk around on their own or in pairs, helping to support one another and encouraging each other to succeed.              Some of the young people pushed their stilt walking even further and began to learn dances with support from the staff on the stilts to be shown in the final performance. 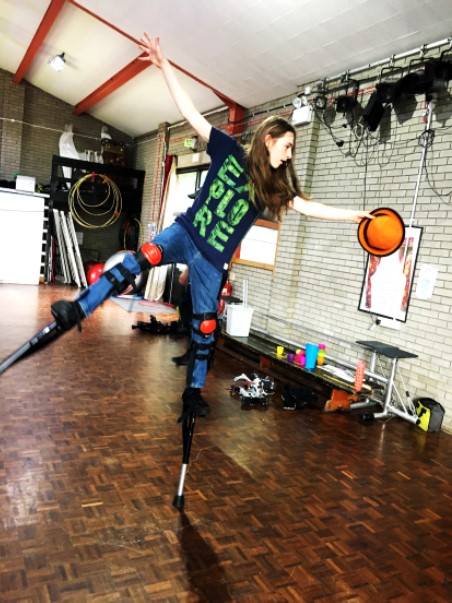 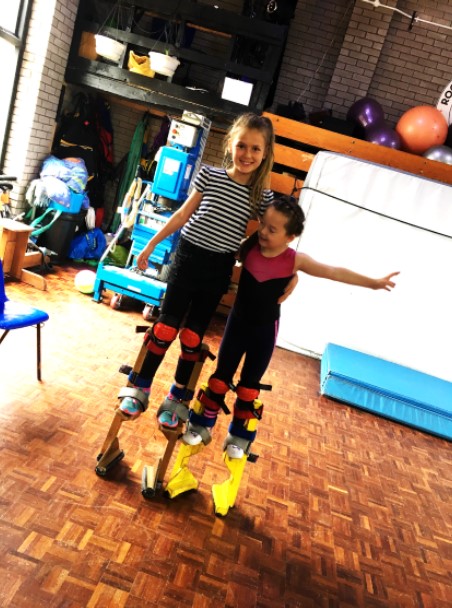 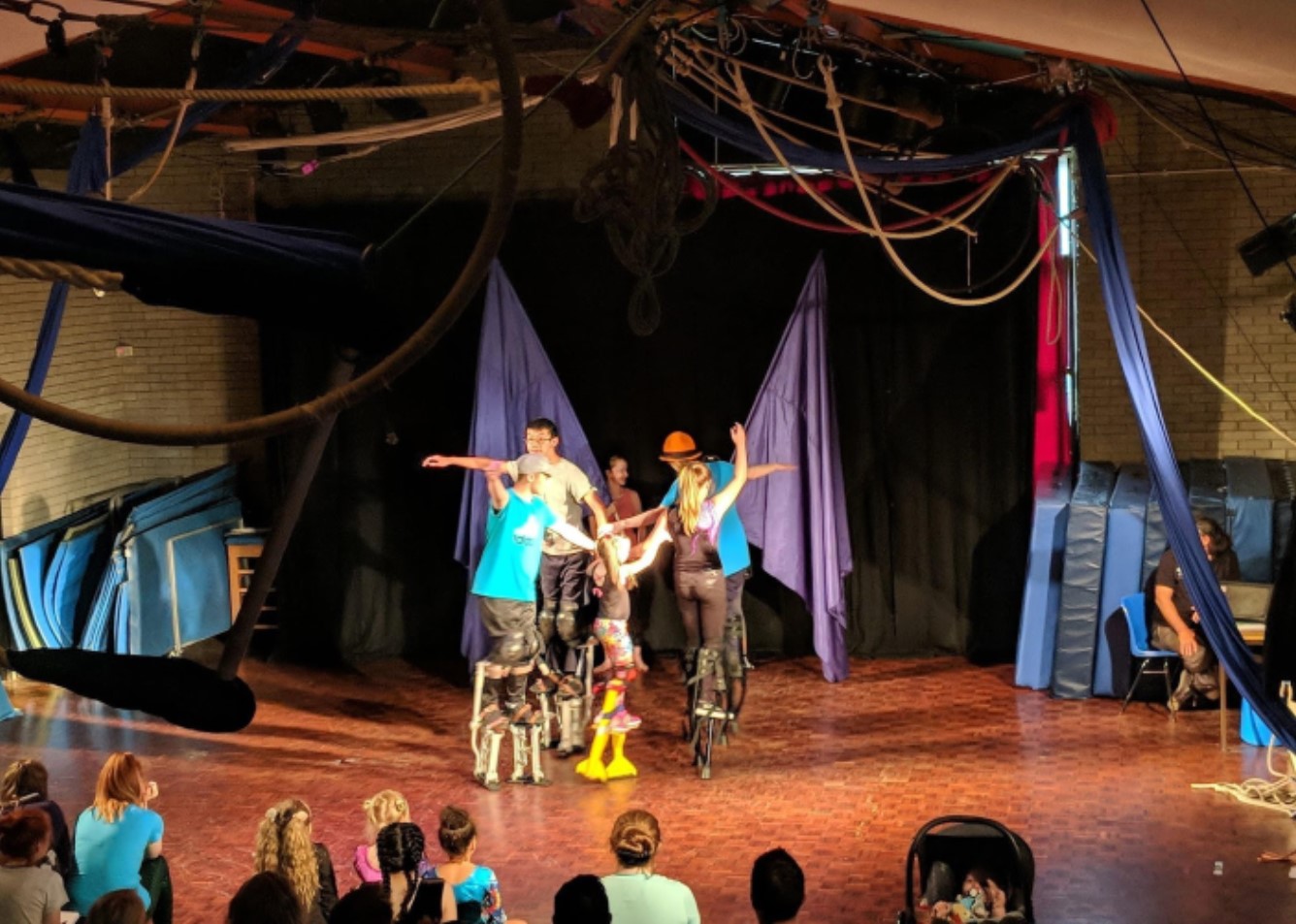 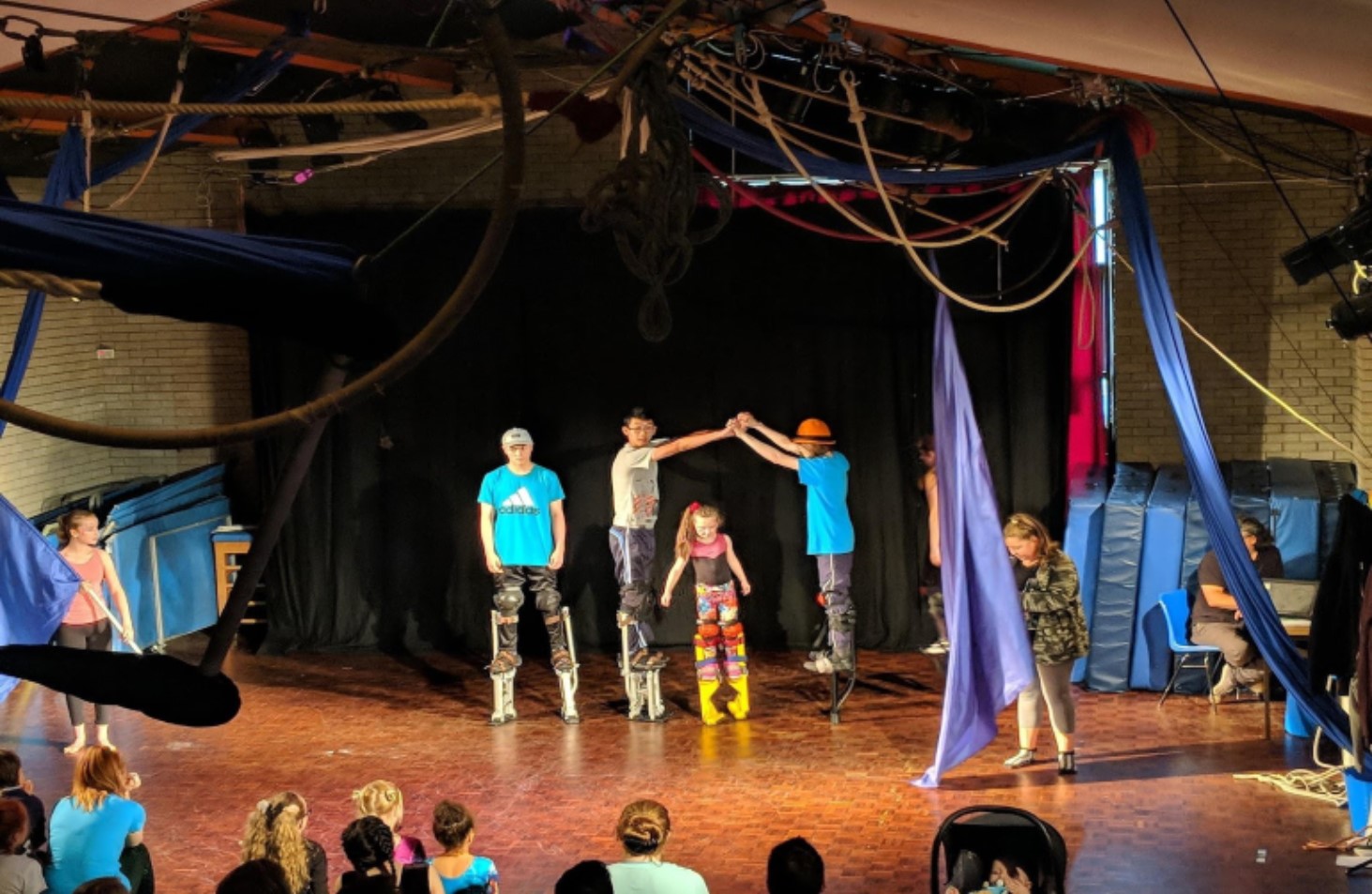 All of the new skills and games we did with the group were enhancing their health and fitness levels, including their physical strength and flexibility during warm ups and on the equipment. The group all tried the aerial equipment, one young girl in particular who is currently in foster care was very nervous when first climbing onto the trapeze, however she had invited her Mum to come and see her in the performance and she really wanted to show her Mum what she had learnt, she pushed through the fear and worked with another young girl in foster care, spending every session from then on building her strength, confidence and creating a routine. She has now joined our regular youth circus classes and is continuing to push her fitness levels on the aerial equipment. Another young girl said “I like doing shows, I was frightened and nervous and exciting and my mum thought I was amazing” 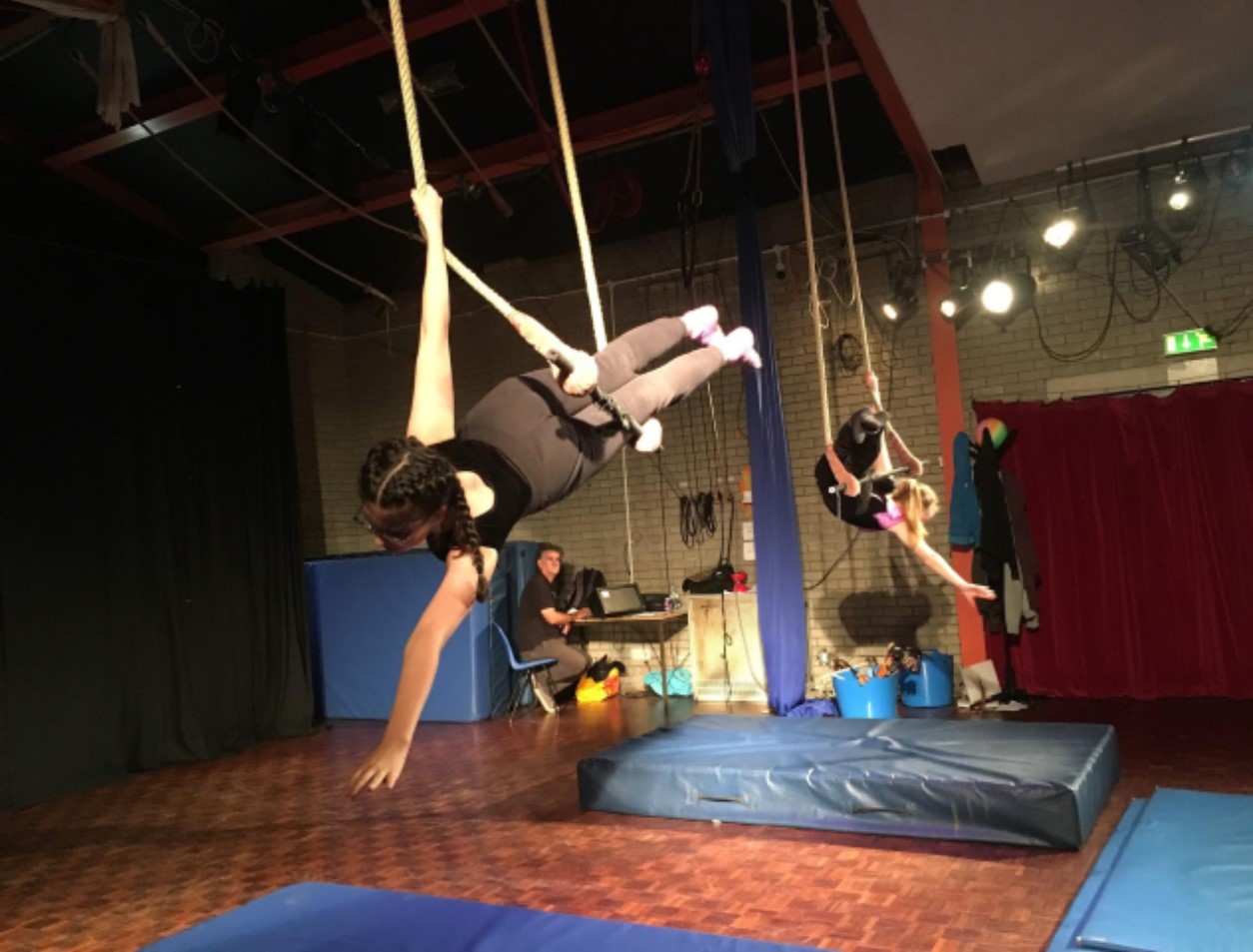 The performance itself was held at our home Skylight Circus Arts as the Church wasn’t available, all the staff worked really hard to put on a special afternoon of performances to parents, carers, family and friends. We encouraged the children and young people to wear clothes they wanted to perform in, some came in their leotards or really brightly coloured costumes. We painted their faces to make the performance feel more on a professional level and had a musician playing their music and stage lighting to put them in the spotlight! The performance lasted a lot longer than we had planned as so many of the young people wanted to show so many of the skills, this meant that we didn’t have time to do a workshop afterwards however the audience really enjoyed themselves and we had a lot of great feedback, one parent said she was in tears when she saw what her 8 year old daughter had learnt.
Participants: 34 Interventions: 106
White : 85% Asian: 6% Chinese : 3% Mixed : 6% 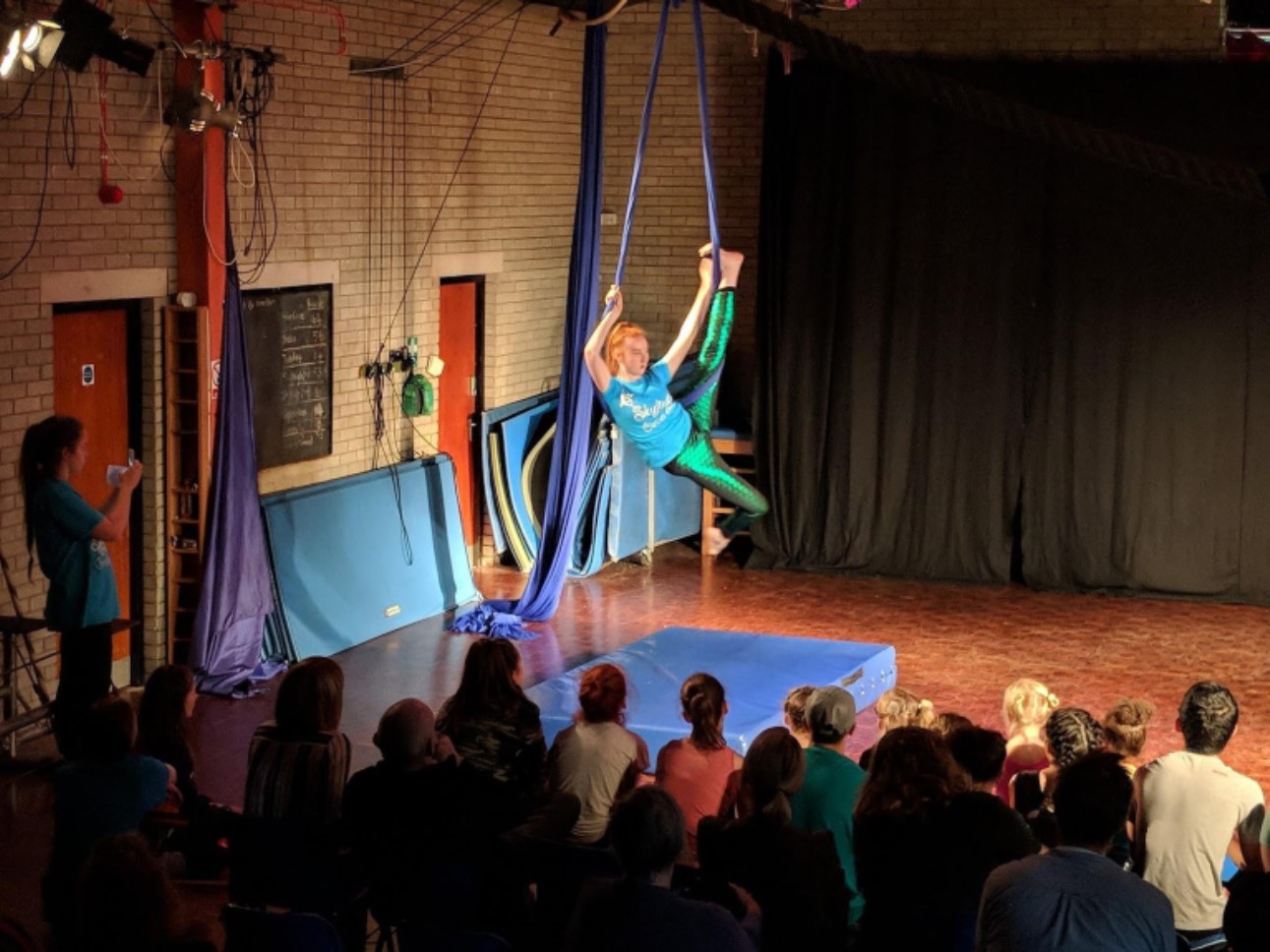 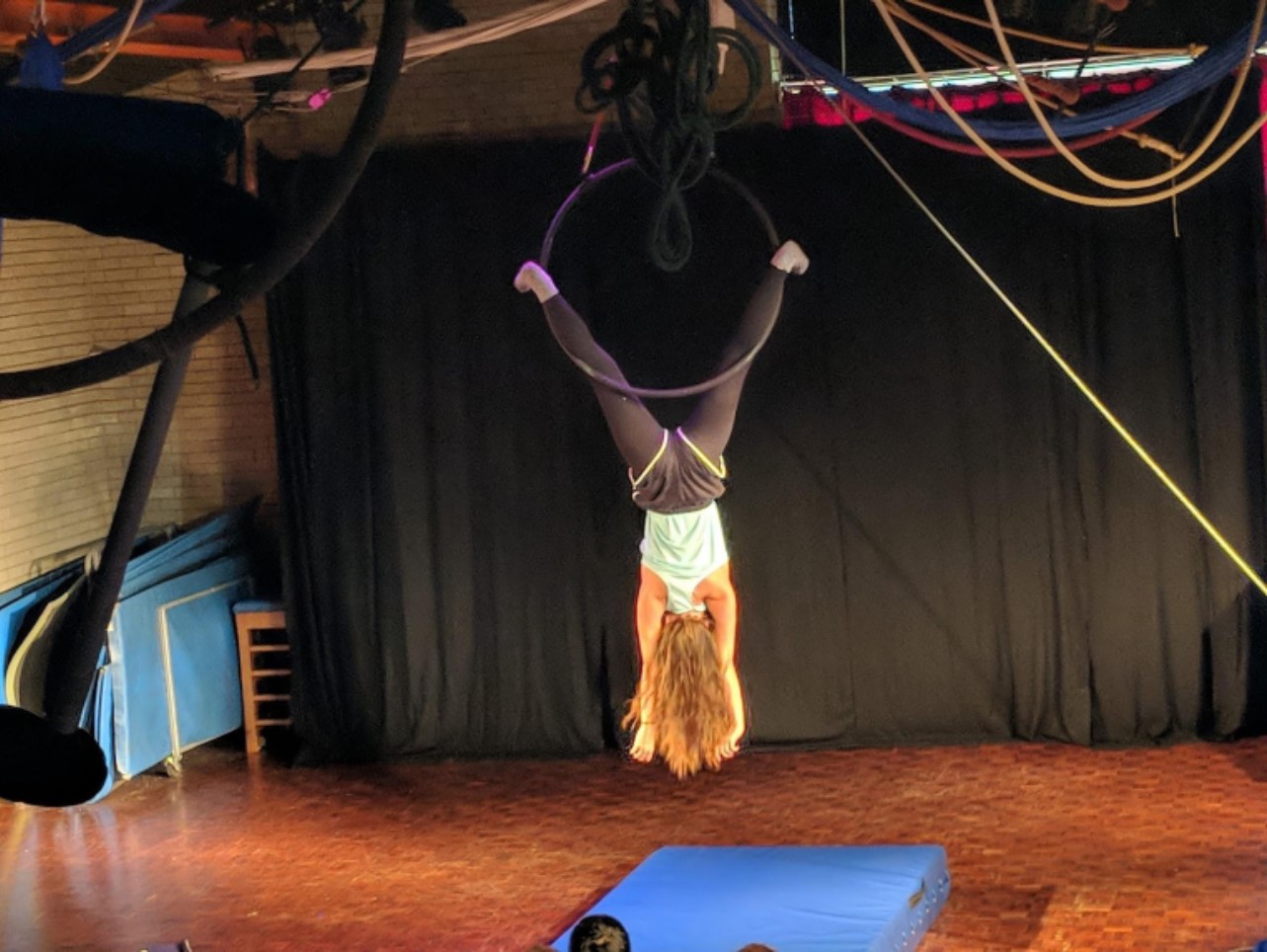 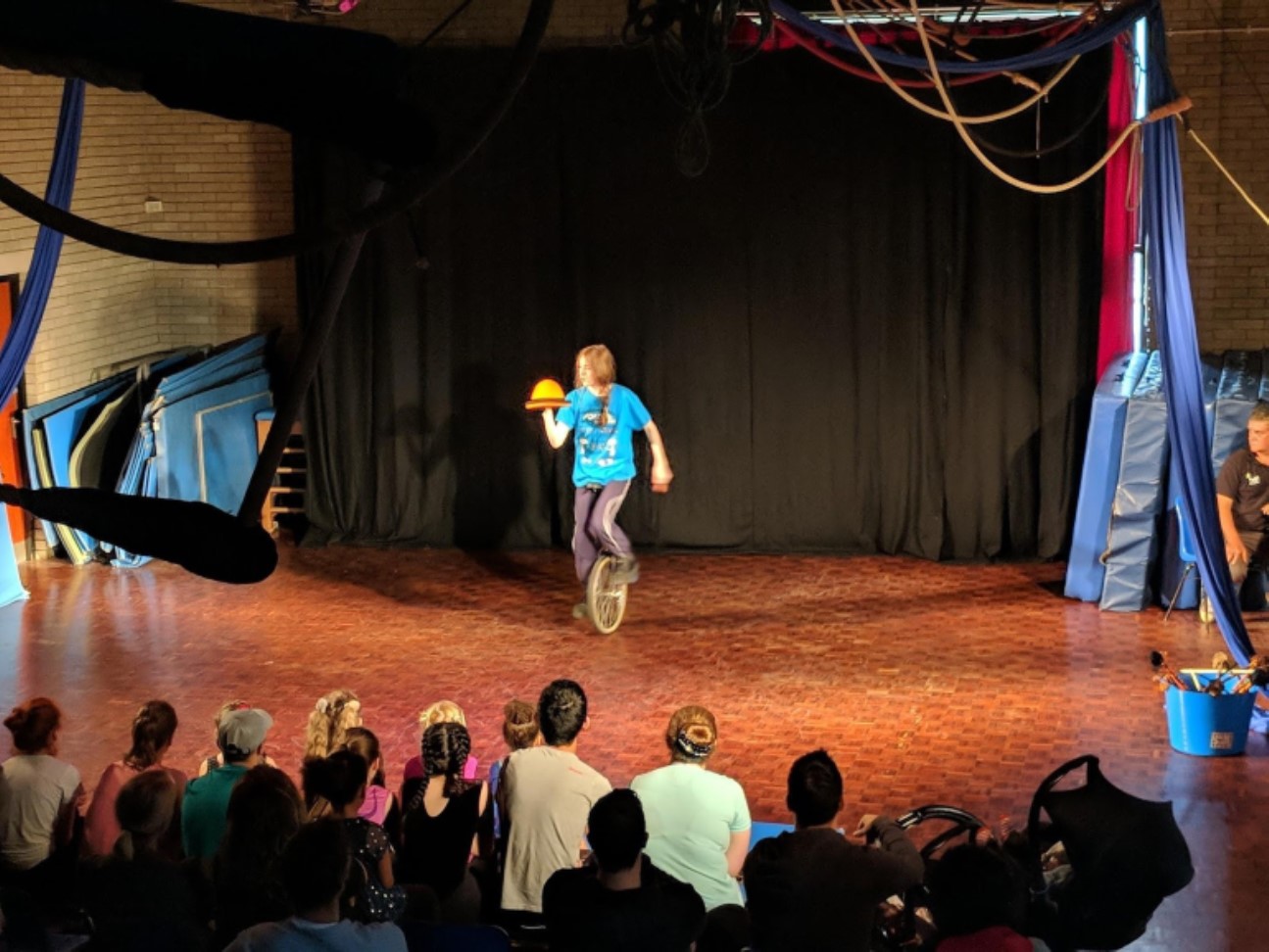 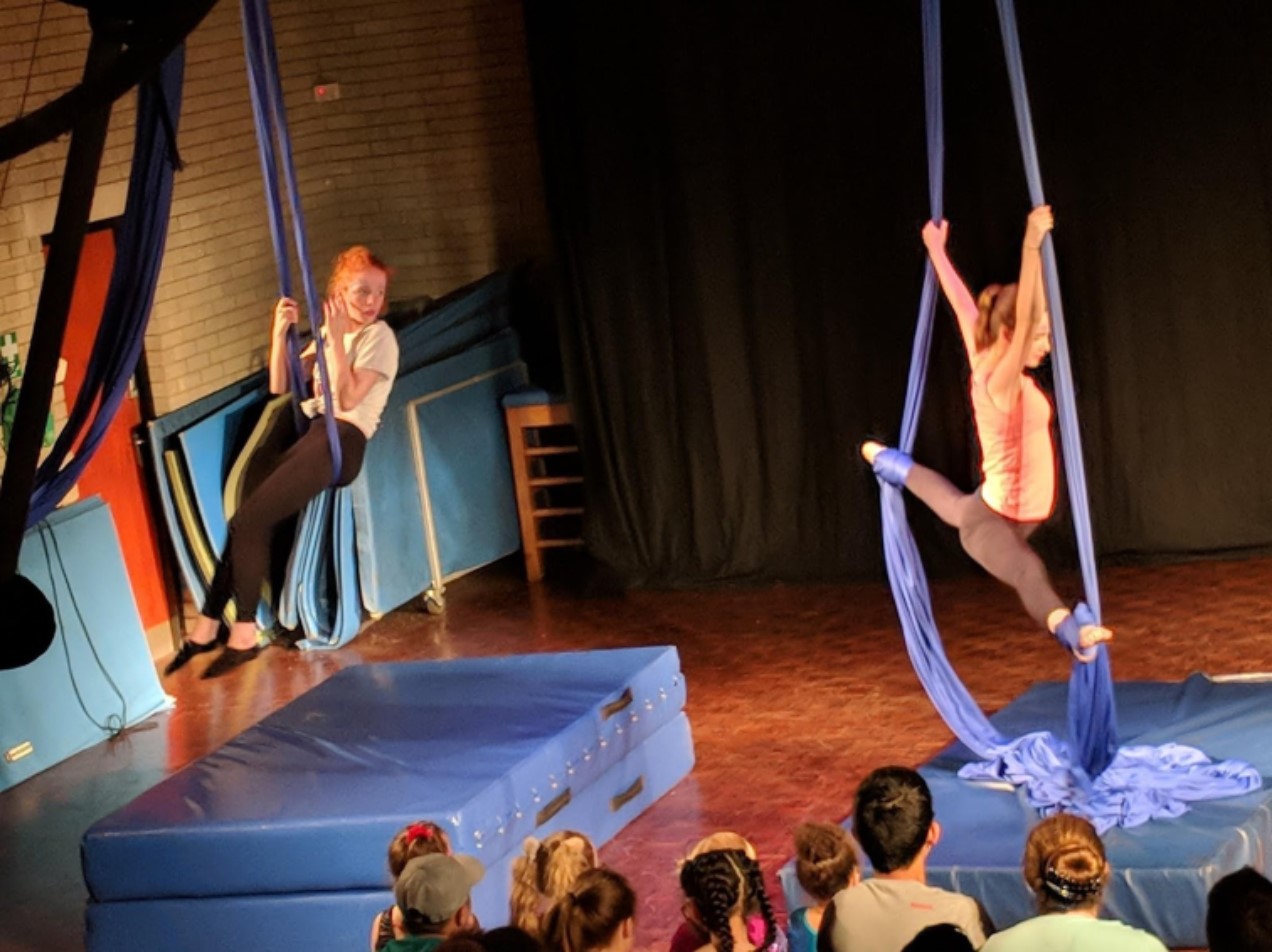 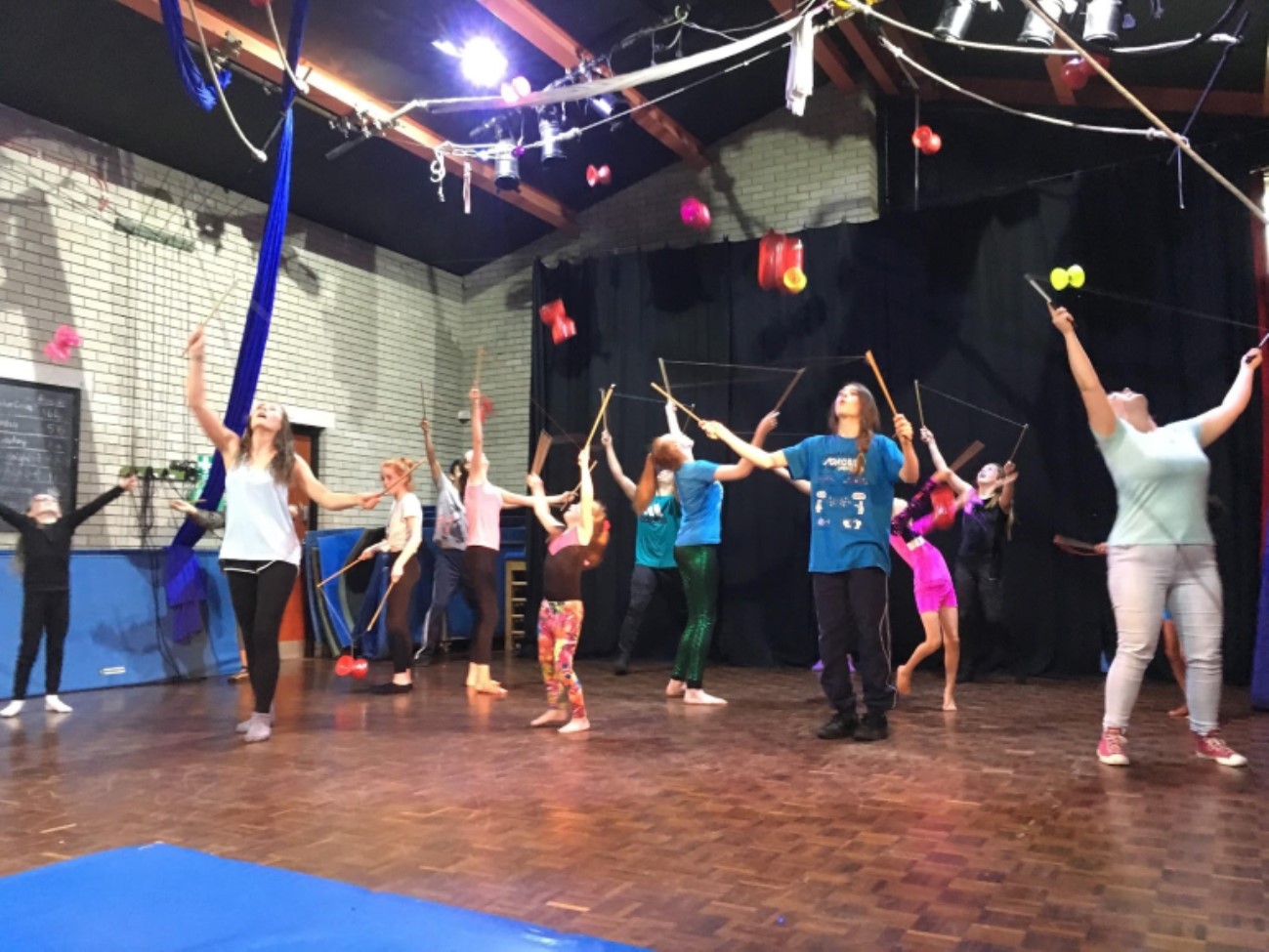 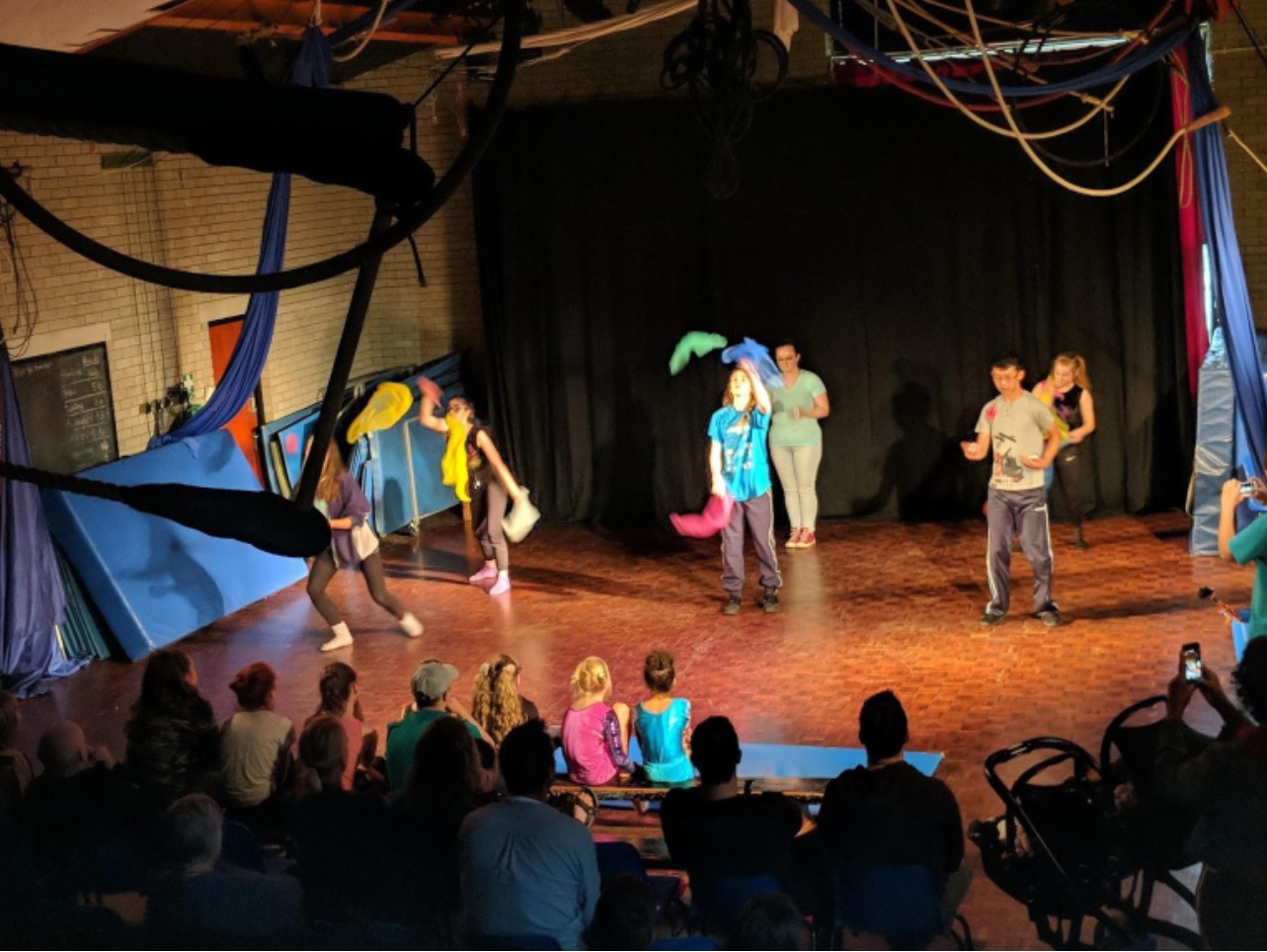 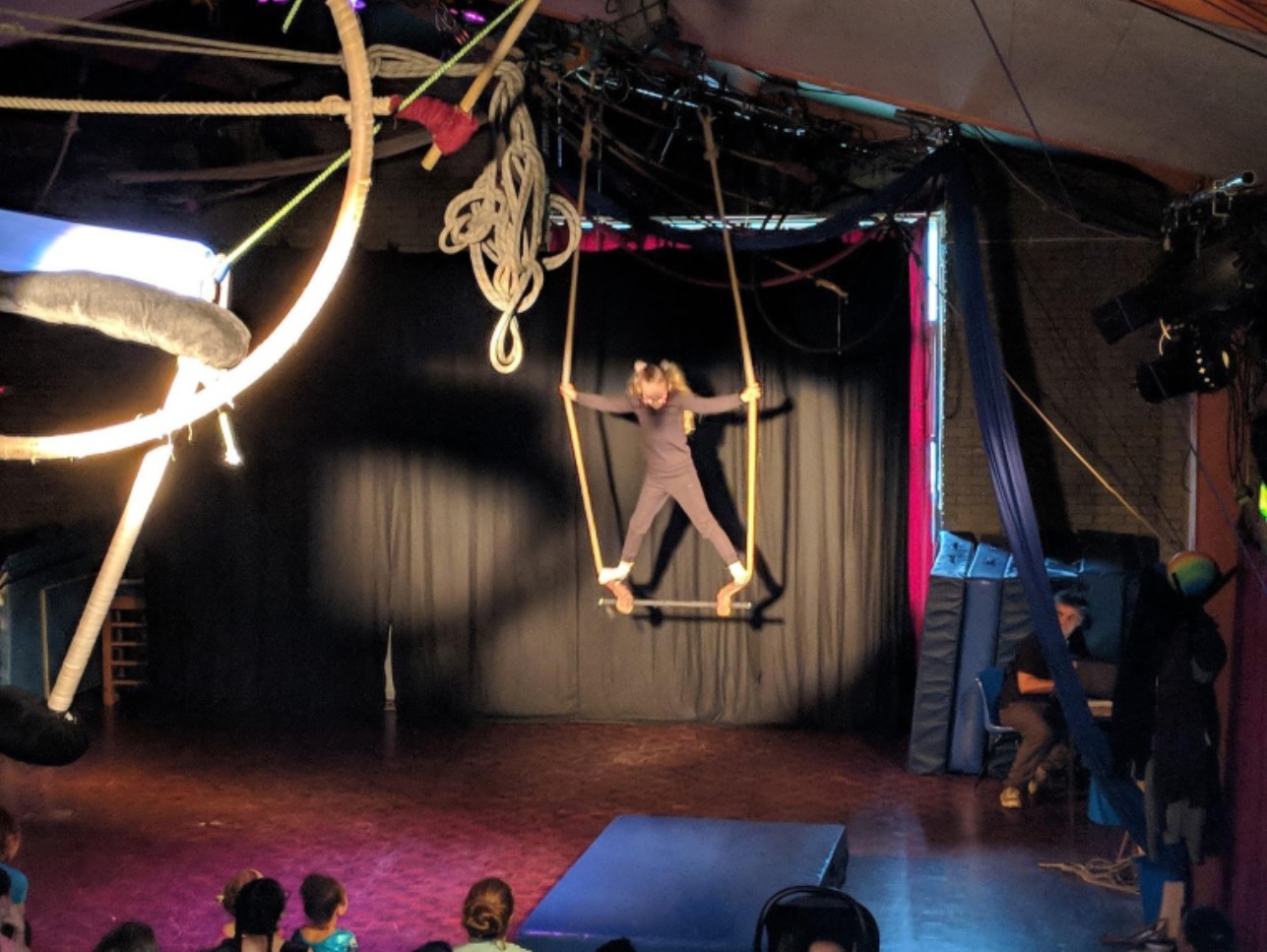 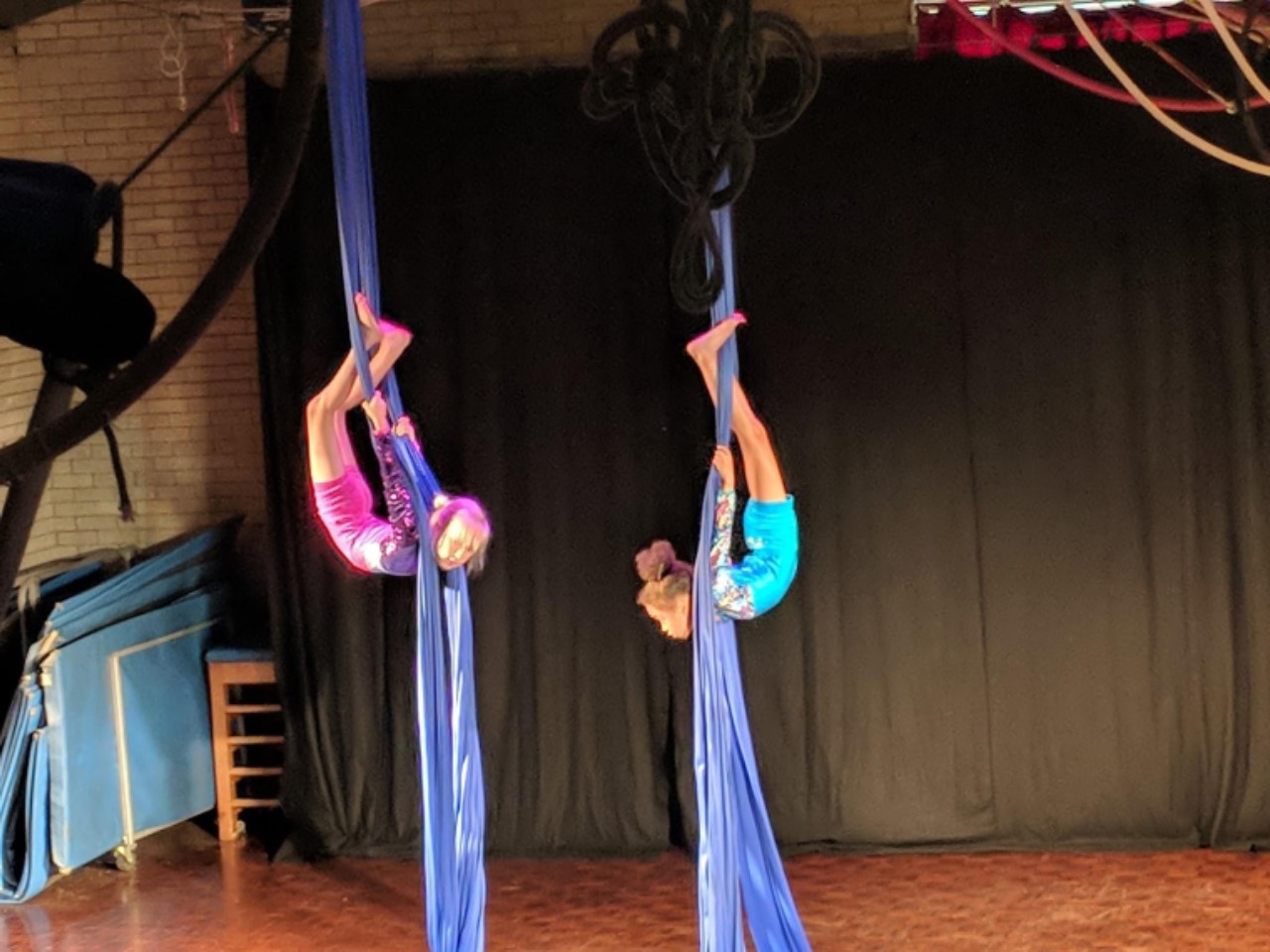 We also asked the group if they would like to perform again at Rochdale’s Feel Good festival, performing along side some professional street artists and musicians. A few of the group were able to come along and show off all of the amazing skills they had learnt! 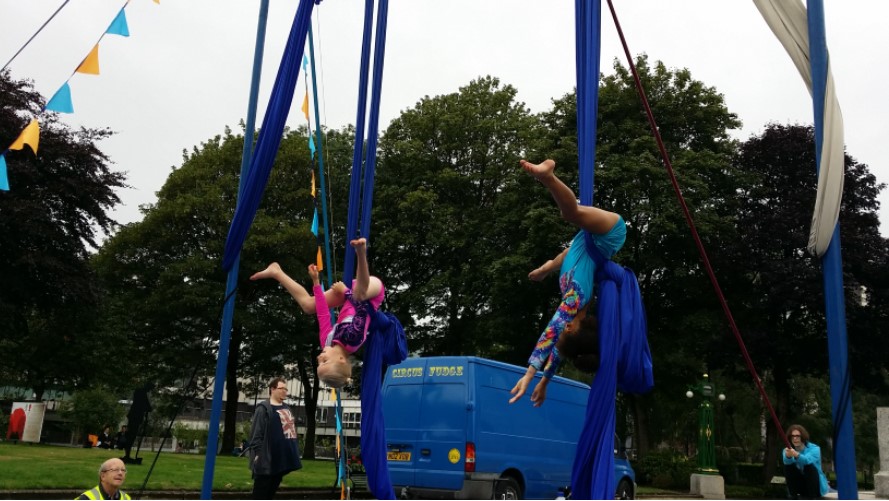 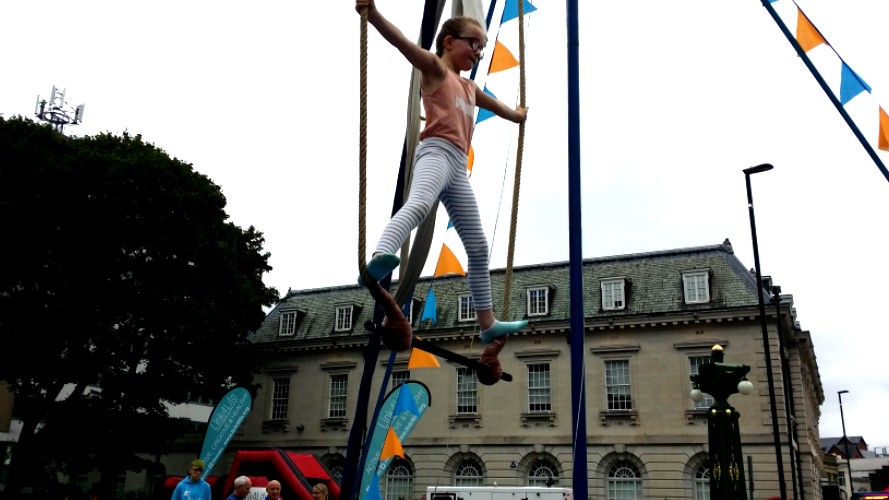 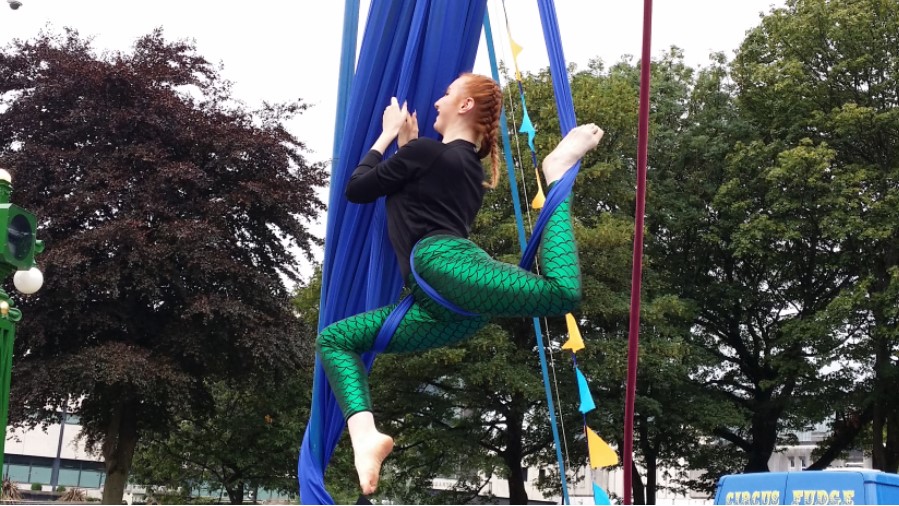 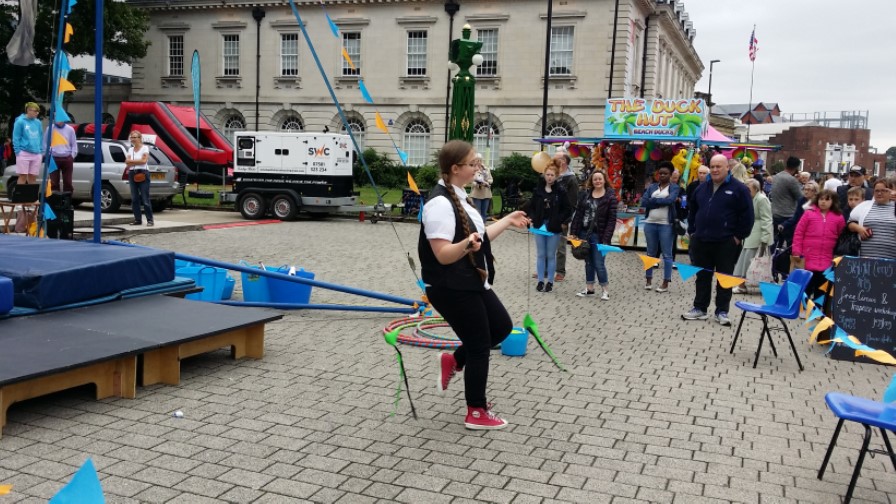 So this year is the 250th year anniversary of circus, and we couldn’t let that go by without some celebration, so at the end of the year Skylight will be putting on a performance inspired by a famous circus show poster from Rochdale, that John Lennon took the name for the song ‘For the Benefit of Mr Kite’.

Prior to the show Skylight were lucky enough to receive funding from The Heritage Lottery Fund to research the history of circus in Rochdale, the aim was to make some display boards with the research we have found, a program to look through, find out peoples memories, see the sites of old circus and this could link into our performance. Some of our youth circus and a few Silver circus (over 55’s) have been working hard visiting Touchstones Rochdale and the Fairground and Circus Archives in Sheffield.

So far we have found lots of interesting information about how the animals were involved in the circus, names of acts, the famous Rochdale Black peas that would be served in tin cans! It’s been fascinating to see photographs dating back to the 19th Century of the Hippodrome in Rochdale and Elephants walking down the streets. The project has really opened the eyes of our youth circus, of just how much circus has changed over the years!

We are excited to start bringing the research together for people to see!